It may be the quintessential question about cancer therapy: why does a particular treatment work well in some patients and not others with the same disease? The question is especially relevant for immunotherapies known as CAR T-cell therapies precisely because they’re so promising. The therapies, which are made by genetically engineering a patient’s own immune system T cells to attack cancer, can cure about 40% of people with otherwise incurable lymphoma, but others relapse or don’t benefit at all.

In a new paper in Nature Medicine, researchers at Dana-Farber, the Broad Institute of MIT and Harvard, and Massachusetts General Hospital analyzed blood samples of patients who received CAR T-cell therapy and found molecular markers of how the patients responded to treatment. The researchers also identified specific types of immune cells that likely contribute to relapse of the disease.

The findings could one day help doctors select the best treatment for patients and help scientists develop CAR T-cell therapies that have higher response rates.

“Gaining understanding of the T cell phenotypes of CAR T cells before and after infusion provides us with insight into the basis for why patients do or do not respond to this potentially life-saving therapy,” says study co-senior author Catherine Wu, MD, of Dana-Farber, Brigham and Women’s Hospital, and the Broad Institute.

In the study, researchers isolated individual tumor cells, immune system cells, and CAR T cells from patients’ blood and sequenced the RNA within them to determine which genes were being expressed. The results constitute the largest set of gene expression data from patients treated with CAR T-cell therapy to date, spanning 105 samples collected from 32 patients. Nicholas Haradhvala, PhD, a computational biologist at Harvard University and the Broad Institute and co-first author of the study, says the scale of the project hinged on collaboration across institutions.

“By leveraging data from Mass General and Dana-Farber, alongside computational frameworks developed at Broad, we were able to make this study a lot larger,” Haradhvala comments. “We thought this was a perfect chance to apply single-cell sequencing technologies to understand the actual mechanisms of treatment failure and success in patients.”

“This was a unique opportunity because we were able to get really deep into the expression profile of the T cells over time,” says Maus. “We wanted to learn which T cells are mediating the response and resistance, because this therapy is a living drug and changes over time. Also, knowing which kinds of the T cells are the most potent helps us design the next generation of T cell therapies.”

In CAR T-cell therapy, doctors first collect a sample of a patient’s T cells, which orchestrate an attack on infected and diseased cells. In the lab, technicians genetically equip those cells with specialized molecules called chimeric antigen receptors (CARs) that lock onto key proteins on the surface of cancer cells. Once the cells have multiplied into the millions, doctors infuse them back into the patient, where they help the immune system take on the tumor. 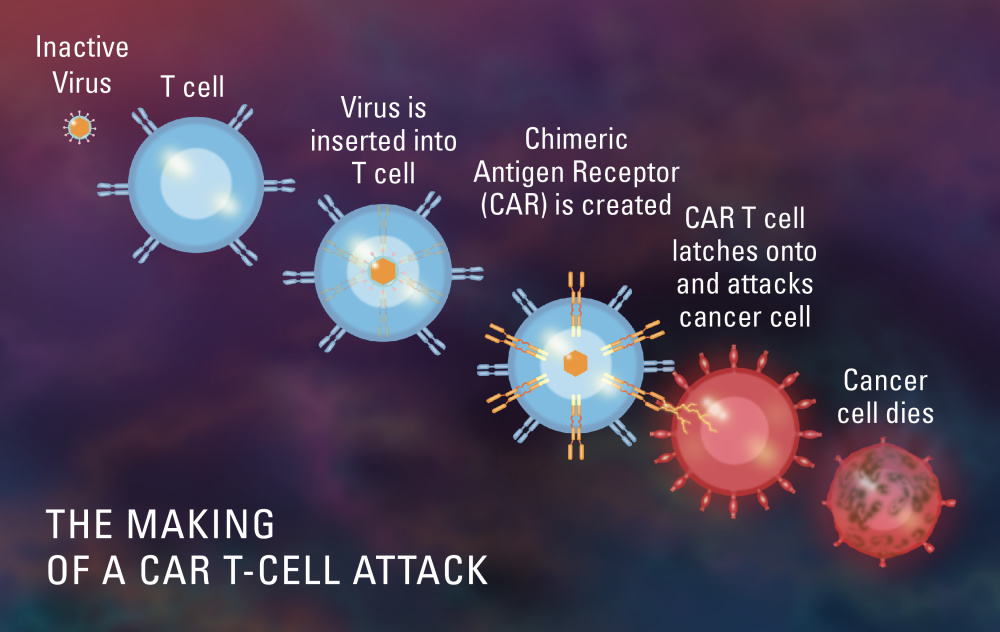 In the study, researchers compared gene expression in blood cells from patients treated with CAR T-cell therapies and in the therapies themselves. The therapies, called axicabtagene ciloleucel (axi-cel) and tisagenlecleucel (tisa-cel), target the CD19 protein on the surface of cancer cells and have similar success rates in patients.

Using single-cell RNA-sequencing, the researchers studied how CAR T cells changed over time — from prior to infusion in patients to a week after infusion. Some surprising differences appeared. Most CAR T cells in patients’ blood after tisa-cel therapy originated from a particular variety of T cells that contribute to the immune system’s memory of specific antigens. These T cells were also more abundant in patients who responded well to the therapy than in those who didn’t. The axi-cel treatment led to a greater mixture of T cell types.

These signatures gave the team clues about which cells help drive relapse. In patients who did not respond to axi-cel, the therapies showed more of a rare subtype of T cell called regulatory T cells, which typically serve as the brakes of the immune system to prevent autoimmune disorders. When researchers studied CAR T regulatory cells (CAR-Tregs) in mice, they found that tumors reappeared if the cells made up just 5% of the total CAR T cells infused back into the animals. This held true for both therapies. The finding suggests that CAR-Tregs may turn off the activity of cancer-fighting T cells as well.

Haradhvala says that manufacturers could potentially remove CAR-Tregs from the engineered cells to lower the chance of relapse.

Getz hopes the work will inspire other researchers to do similar collaborative studies of other FDA-approved CAR-T therapies.

“This was the largest CAR-T dataset yet, but it’s still not huge,” he said. “As more and more patients get this therapy, we’ll be able to expand the power of this research.”

This piece was adapted from an article by the Broad Institute.