Researchers Focus on How to Invigorate ‘Exhausted’ T-Cells in Immunotherapy

Despite the sometimes-dramatic success of new cancer immunotherapies like checkpoint inhibitor drugs and CAR T-cells, thus far only a minority of patients have responded or gained long-lasting benefits.

A major reason for the inconsistent results of immunotherapy is a phenomenon known as “T-cell exhaustion” — a weakening or loss of tumor-killing function by  T-cells, the workhorses of the immune response. Most of the immunotherapies rely on T-cells (with the aid of other cells and molecules) to recognize and kill tumor cells. Drugs called checkpoint inhibitors work by releasing molecular “brakes” known as PD-1, PD-L1, and CTLA-4. Disabling these checkpoints unleashes T-cells against the cancer. Other immunotherapies, like T-cells, are based on removing the patient’s own T-cells, modifying them to more effectively attack the cancer, and infusing them back into the patient.

These new therapies have helped enough patients and shown sufficient promise to revolutionize cancer treatment. But the hope of achieving more consistent results in more types of cancer depends on a better understanding of T-cell exhaustion and how dysfunctional T-cells can be reinvigorated.

Gordon Freeman, PhD, a leading immunotherapy researcher at Dana-Farber, discovered PD-L1, a molecule on cancer cells which links up with PD-1 on T-cells, forming a pathway that inhibits immune responses and therefore is central to the issue of T-cell exhaustion. (While T-cell exhaustion is a challenge for immunotherapy, it apparently evolved as a protective role in preventing immune responses against invaders from lasting too long and damaging normal tissues.) Freemen showed that blocking PD-1 with antibodies freed the T-cell response and enhanced immune responses against cancer. 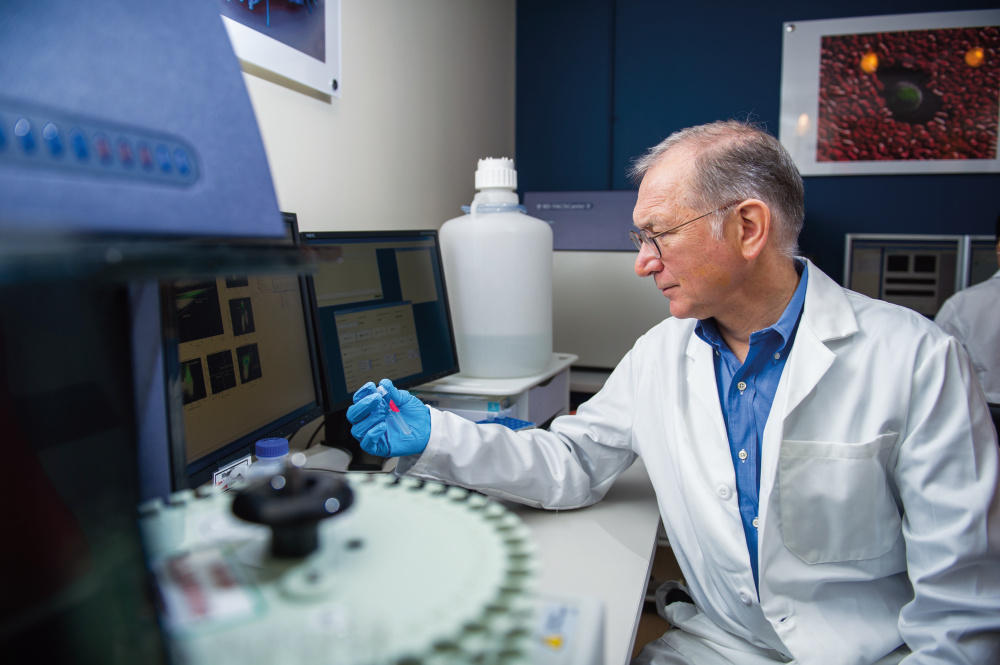 Recently, Freeman and his colleagues identified a novel, previously unknown checkpoint that affects T-cells and natural killer (NK) cells. Publishing in the journal Cancer Immunology Research, the scientists say this checkpoint works through the interaction of two proteins, KIR3DL3 and HHLA2, which causes inhibition of T-cell activation and prevents tumor cell-killing by NK cells. HHLA2 is expressed in kidney cancers, but usually where PD-L1 is not expressed.

“This is an alternative pathway of T-cell exhaustion and may give us another way to re-invigorate the immune response when blocking PD-L1 or PD-1 alone doesn’t work,” Freeman notes.

Freeman showed that blocking the interaction of KIR3DL3 and HHLA2 enabled T-cells and NK cells to be activated.

“These findings suggest blockade of the KIR3DL3-HHLA2 interaction could represent a novel approach for cancer immunotherapy,” say the scientists.

Researchers continue to identify factors causing T-cell exhaustion. For one thing, T-cells lose their ability to proliferate and kill cancer cells after prolonged, repeated stimulation by the cancer cells’ antigens — the distinctive changes in cancer that can be recognized by the immune system. In fact, the T-cells actually change, sprouting inhibitory receptors such as PD-1 on their surface.

Another hurdle is that T-cells responding to a cancer must penetrate a hostile “tumor micro-environment” made up of tumor cells, immunosuppressive cells, connective tissue, and chemical signaling molecules that dampen the immune response. Moreover, investigators have identified regulatory proteins called transcription factors that influence PD-1 expression and contribute to T-cell exhaustion.