Like the NASA Apollo mission itself, research projects funded by the Cancer MoonshotSM initiative have lofty ambitions. And like the effort to land an American on the moon, the technical and logistical work that went into these projects has often been obscured by the magnitude of their goals.

A quartet of recent papers in the journal Clinical Cancer Research put the behind-the-scenes efforts involved in a major Moonshot project squarely on the record. The papers provide an inside look at some of the essential start-up activities of the Cancer Immune Monitoring and Analysis Centers and Cancer Immunologic Data Commons (CIMAC-CIDC), a network of laboratories and a bioinformatics center established to perform the analytic work involved in developing new immunotherapies for cancer.

The publication of the papers not only documents how one group of scientists collaborated on a specific project but also provides a road map for how multiple research institutions can form a network by adopting consistent laboratory practices and procedures.

Dana-Farber Cancer Institute has been integral to the project. It is one of four CIMACs, with Icahn School of Medicine at Mount Sinai, MD Anderson Cancer Center, and Stanford University, and serves as the network’s “data commons,” where molecular and clinical data from all four centers is collected and made available to researchers.

The National Cancer Institute (NCI) established the CIMAC-CIDC in 2017 to meet a critical need in cancer immunotherapy research. Immunotherapies have been a landmark advance in cancer treatment, but their benefits have largely been confined to patients with certain kinds of cancers. The key to better treatments is a better understanding of the interactions between tumor cells and the immune system — the signals that draw an immune attack on cancer and the countermeasures tumor cells take to evade such an attack.

To glean that kind of information, researchers conduct a detailed probe of the immunological conditions within a tumor — a type of analysis known as immunoprofiling. Such an analysis can reveal much about the state of relations between the tumor and immune system, such as the types of immune cells in and around the tumor and where they’re most concentrated; the different patterns of gene expression within tumor cells; and how those patterns affect tumors’ vulnerability to an immune attack.

The CIMAC-CIDC was created to perform immunoprofiling of tumor samples from patients enrolled in immunotherapy clinical trials so the results can be matched against patients’ outcomes. The ultimate goal is to identify biomarkers — features of the tumor cells and neighboring immune cells — that can predict which immunotherapies are best for specific patients.

The CIMAC-CIDC addresses a key challenge associated with clinical trials of cancer immunotherapies. Thousands of such trials have been conducted, some by single institutions, many by cooperative groups of several institutions. The variety of techniques for collecting and preserving tumor tissue, the numerous reagents and technologies for analyzing the tissue, and the divergent approaches to reporting results have made it difficult to compare data from different trials or different institutions. The CIMAC-CIDC was formed to bring consistency to the process, by serving as a hub for tissue analysis and a bridge to research that links laboratory data to the results of immunotherapy clinical trials.

To fulfill that role, the network first needed to ensure its own members were generating reliable, compatible data.

“The mission of the CIMACs is to do big things: to create a network of capabilities that can be used by cooperative groups that have a strong clinical structure but don’t have uniform data-generation and -analysis platforms,” says Dana-Farber’s Catherine Wu, MD, a co-author of the new Clinical Cancer Research papers and principal investigator of the Dana-Farber CIMAC with F. Stephen Hodi, MD. The papers describe the process by which the CIMACs brought their testing methods into harmony. 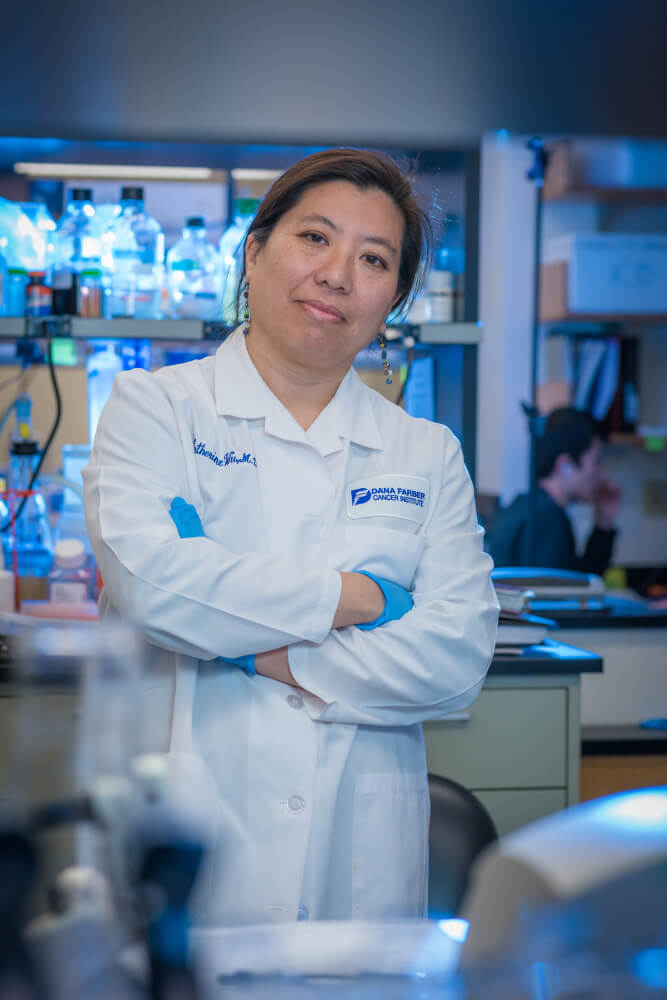 Step one was to decide which tests would constitute the backbone of the network’s immunoprofiling effort. In a series of meetings beginning in 2017, representatives of the CIMACs “agreed on the workhorse assays — the standard battery of tests — that every center would have the capability of performing,” Wu relates. “The second step was to make sure we can all do them comparably, so that the data generated is valid across multiple trials and institutions.”

The representatives settled on four “tier 1” tests for use in all or most trials:

The CIMACs then undertook a harmonization study for each of these tests. Although the procedures varied from study to study, they followed a similar pattern. For the studies of WES and RNA sequencing, for example, DNA and RNA were extracted from non-small cell lung cancer tumors and sent to three CIMACs for analysis. Pools of cells with known genetic mutations were also sent to the centers to evaluate the accuracy of their WES tests.

“This required a herculean amount of working together among the CIMACs,” Wu states. “We developed a set of standard operating procedures for handling and preparing tissue and genetic material, identified a series of common reagents, and established consensus protocols for testing and reporting results. There was also a great deal of back-and-forth in designing the harmonization studies and deciding what our metrics for success would be.”

The good news is that the harmonization studies were successful: testing results at each site were well within agreed-upon standards of consistency.

The CIDC, based at Dana-Farber, serves as a repository for data generated by the CIMACs and clinical data from specific immunotherapy trials.

“We’re charged with organizing all that data and making it available to the broader immune-oncology community,” says Ethan Cerami, PhD, principal scientist in Dana-Farber’s Department of Data Science and principal investigator of the CIDC. “By integrating immunoprofiling and clinical data, researchers will be in a position to identify new biomarkers for immunotherapy.”

With its testing procedures in sync, the network has begun applying them to analyze specimens from clinical trials.

In mid-2021, Dana-Farber’s Jonathan Schoenfeld, MD, MPhil, MPH, published a study in Clinical Cancer Research on a trial of a combination of immune checkpoint inhibitor drugs and low-dose radiation therapy in patients with metastatic colorectal cancer. He is following it up with a study in which tissue and DNA samples are being analyzed with CIMAC tier one assays.

A 2021 study published in the journal Blood led by Wu and Dana-Farber’s Livius Penter, MD, used RNA sequencing, WES, CyTOF and other CIMAC capabilities to explore how treatment with the checkpoint inhibitor ipilimumab affects the T-cell response in patients with leukemia who have relapsed after a stem cell transplant. This clinical trial, sponsored by the ETCTN network, was led by Dana-Farber investigator Matthew Davids, MD, MMSc.

In study by Wu and Penter in the journal Blood Advances, CIMAC testing of individual tumor cells and immune cells revealed how these cells changed in a patient with a myeloproliferative cancer that was treated with a checkpoint inhibitor after relapse from a stem cell transplant.

As new reagents and technologies for DNA and RNA sequencing become available, the CIMACs will examine how they stack up against current technologies.

“Since we started the network, the reagents that are used for even standard exome sequencing have been upgraded,” Wu observes. “We’re comparing the performance of the new vs. the old. This kind of testing ensures we can continue to be an effective resource for researchers well into the future.”