“When we have an effective targeted therapy, it is a great day,” says Kimberly Stegmaier, MD, of Dana-Farber/Boston Children’s Cancer and Blood Disorders Center. “About a quarter of children’s tumor mutations have targeted therapies in which we have high confidence.”

However, for the other 75 percent, that leaves chemotherapy, radiation therapy, and surgery, with their long-term side effects. And for children with advanced cancers, outcomes remain poor.

But hope is on the horizon. Stegmaier and her collaborators at the Broad Institute of Harvard and MIT have uncovered a whole new universe of genes to target in childhood cancer. They’re catalogued in what’s known as the Pediatric Cancer Dependency Map, published March 2021 in the journal Nature Genetics.

These newly uncovered genes are not necessarily responsible for initiating the cancer. But without them, childhood cancers can’t live or grow. And some are already suggesting new treatment strategies.

Can’t live without you

Understanding what genes cancers need for their day-to-day viability is a new way of thinking about cancer. Stegmaier offers this analogy:

“When you have an infection, the doctor has an antibiotic lookup chart and can say, this patient has Staph aureus, and here’s the panel of antibiotics Staph. aureus is susceptible to,” she says. “We’ve been working to create that for pediatric cancer, to be able to target those Achilles heels.”

Genetic testing of cancer cells can benefit many children with relapsed, treatment-resistant, or high-risk leukemia, report Dana-Farber/Boston Children’s researchers in a related study.

Pediatric cancer dependencies fall into various buckets. Some of these genes, known as transcription factors, are needed for other genes to turn on or off. Other genes help with signaling within the cell. Some help maintain the cell’s structure. Others carry instructions for making enzymes that cells use to convert nutrients into energy.

Losing any of these factors could bring a cancer cell to its knees.

“We systematically delete each gene in the genome one by one and see what happens to the cells: Do they die, grow less well, grow better?” she explains. “In this way we can identify genes which, when deleted, affect the growth of cancer cells.”

Researchers previously created a similar cancer dependency map for adults. But while child cancers share some dependencies with adult cancers, they also have their own distinct vulnerabilities. And while scientists initially assumed that the map would be sparse for children, that isn’t the case. The pediatric map is as rich with possibilities as the adult map. 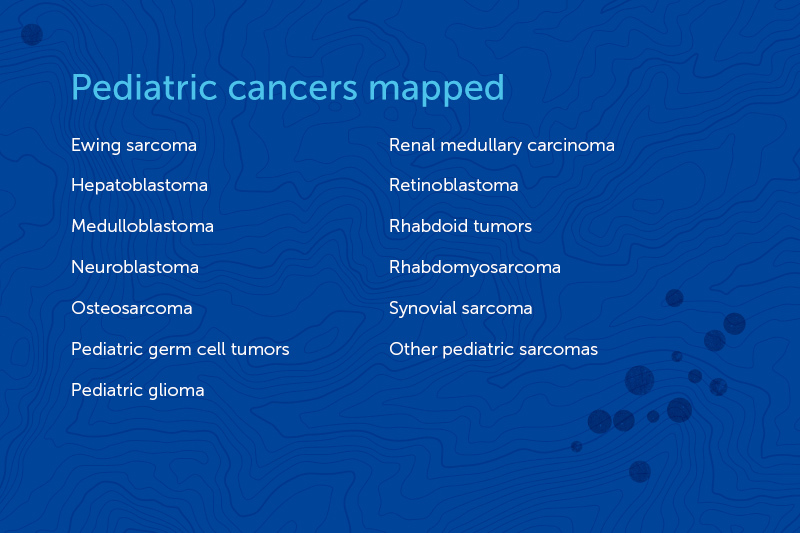 In all, the first-generation Pediatric Cancer Dependency Map covers 13 types of childhood solid tumors and brain tumors (see above). Many genes on the map code for proteins that had never before been linked to childhood cancer. Some are specific to particular cancers, like Ewing sarcoma. Some come into play only if a companion gene is also mutated or not fully turned on. In many cases, the gene was involved in the original development of the tissue. For example, rhabdomyosarcoma is dependent on genetic factors involved in muscle development.

From genes to treatments

“We now have several follow-up stories in various stages,” says Stegmaier. “The data are public. Academic researchers and pharmaceutical companies can mine it, and our data can help them vet the best candidates.”

In a separate study in the journal Cancer Discovery, Stegmaier and Yana Pikman, MD, of Dana-Farber/Boston Children’s found that genetic testing of cancer cells can benefit many children with relapsed, treatment-resistant, or high-risk leukemia.