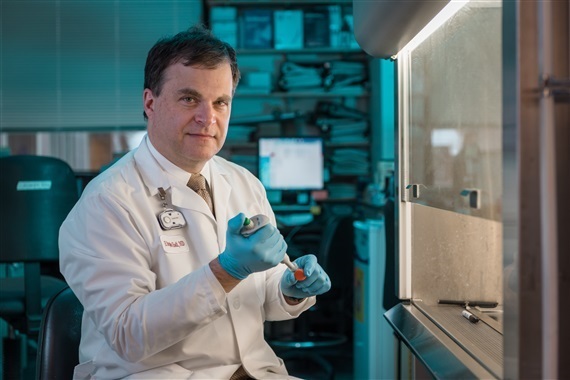 A combination of two drugs that target different proteins on immune system T cells kept advanced melanoma in check significantly longer than one of the drugs alone in a phase 3 clinical trial involving 714 patients. The trial, known as the RELATIVITY-047 study was co-led by Dana-Farber Cancer Institute investigators and the results were reported in the New England Journal of Medicine.

“Immune checkpoint inhibitors such as nivolumab have revolutionized the treatment of patients with advanced melanoma,” said F. Stephen Hodi, MD, the director of the Melanoma Center and the Center for Immuno-Oncology at Dana-Farber and the co-senior author of the study. “However, novel combinations of checkpoint inhibitors that include additional immune targets are needed to further improve results. The RELATIVITY trial is the first study to demonstrate a clinically important benefit by simultaneously inhibiting the LAG-3 and PD-1 pathways.”

In the RELATIVITY study investigators compared the effectiveness of the drug nivolumab, an immune checkpoint inhibitor that is the current standard of care for previously untreated metastatic or unresectable melanoma, by itself against a combination of the LAG-3 blocking antibody relatlimab and nivolumab given as a fixed-dose. Trial participants who received the combination therapy as their initial treatment had a superior median progression-free survival – the time in which the disease did not worsen – of 10.1 months, compared to 4.6 months for those treated with nivolumab alone. Twelve months after treatment, 47.7% of patients treated with the two-drug regimen had no advance of their disease, compared to 36% of those who received only nivolumab. The side effects of the combination were generally manageable.

The relatlimab–nivolumab combination also demonstrated a progression-free survival benefit over nivolumab in prespecified subgroups according the study investigators. Patients with characteristics that are typically associated with a worse prognosis, such as visceral metastases, high tumor burden, elevated levels of serum LDH, or mucosal or acral melanoma, had better outcomes with relatlimab–nivolumab than with nivolumab alone.

Both nivolumab and relatlimab are antibody drugs. They target separate proteins on T cells to revive and reinvigorate the cells’ natural attack on tumor cells. Nivolumab targets PD-1, a checkpoint protein that prompts T cells to call off their attack when it binds to a corresponding protein on tumor cells. Relatlimab targets the protein LAG-3, an immune checkpoint receptor protein that functions to control T-cell response, activation and growth.

Follow-up evaluation of survival and long-term benefit of patients in the RELATIVITY study is ongoing.

The clinical trial was supported by Bristol Myers Squibb.