In an era when targeted therapies are often effective against multiple types of cancer, the U.S. Food and Drug Administration’s accelerated approval of a two-drug therapy for solid tumors carrying a specific mutation in the BRAF gene is a prime example of this trend. For patients with glioma brain cancer that harbors the mutation, the ruling is a landmark.

The approval of dabrafenib plus trametinib for patients with tumors that have a V600E mutation in BRAF represents the first time a targeted therapy has been authorized for a subset of patients with glioblastoma, the most aggressive type of brain cancer, based on a clinical trial. One of those trials, a phase 2 study co-led by Dana-Farber investigators, found that the combination shrank tumors by 50% or more in one-third of patients with hard-to-treat glioblastomas, and 69% of patients with low-grade gliomas carrying a BRAF V600E mutation.

The FDA’s approval means the combination can now be used as standard therapy for adult and pediatric patients six and up with metastatic or inoperable solid tumors that have a BRAF V600E mutation, have worsened after previous therapy, and have no satisfactory alternative treatment. The decision was based on data from three clinical trials, including the ROAR (Rare Oncology Agnostic Research) study co-led by Dana-Farber’s Patrick Wen, MD. 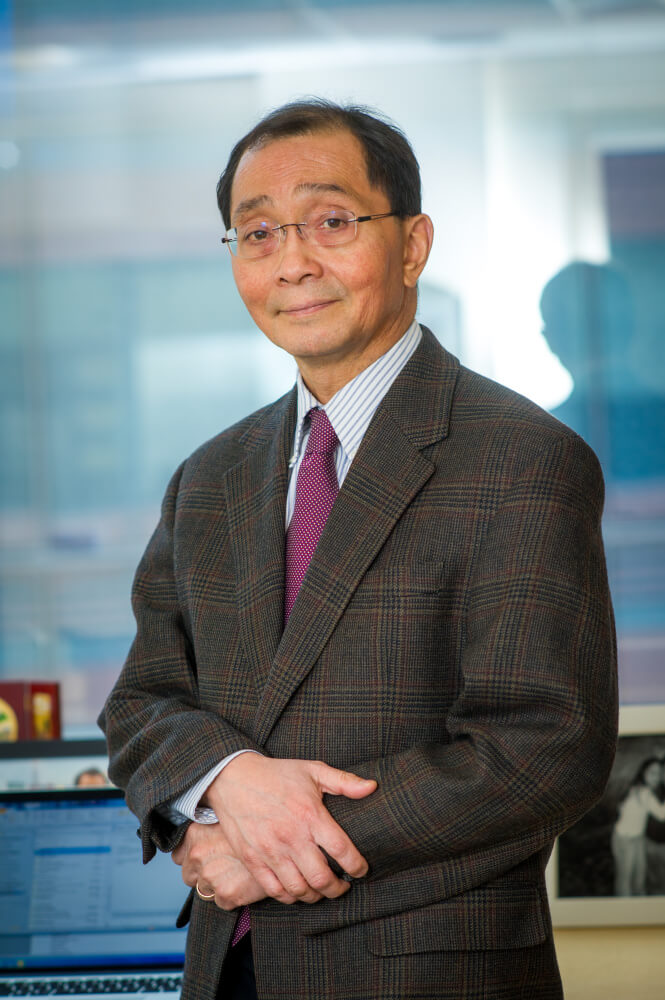 Dabrafenib and trametinib both target proteins in the MAPK pathway, which conveys growth signals from the cell surface to DNA within the nucleus. When stuck in the “on” position, the pathway can lead to runaway cell growth and, eventually, a solid tumor. Dabrafenib inhibits an enzyme called B-Raf, and trametinib inhibits molecules called MEK1 and MEK2. They have been used in combination to treat melanoma, non-small cell lung cancer, and thyroid cancer.

The BRAF protein is a signal carrier that plays a role in regulating the MAPK signaling pathway. BRAF V600E mutations can send the MAPK pathway into overdrive.

Although the BRAF V600E mutation is found in only two to three percent of patients with high-grade gliomas, it occurs in up to 60% of certain types of low-grade gliomas.

The ROAR study has been enrolling patients since 2014 in 27 community and academic cancer centers in 13 countries. Known as a “basket” trial, it enrolls patients who share a common tumor characteristic – in this case the BRAF v600E mutation – although they may have an array of different cancers. The study includes patients with thyroid and biliary tract cancers, gastrointestinal stromal tumors, hairy cell leukemia, multiple myeloma, low- and high-grade glioma brain tumors, and others. The study is examining participants’ overall response rate to dabrafenib combined with trametinib.

The study included 45 patients with hard-to-treat, high-grade gliomas, including glioblastomas. The combination therapy shrank tumors by 50% or more in one-third of these patients, the investigators reported.

The study also included 13 patients with low-grade gliomas. Of those, nine had an objective response to the drug combination, for a response rate of 69%.

Three patients had complete responses their tumors no longer could be seen on imaging scan – and 12 had partial shrinkage of their tumors. The patients were not cured, but those who responded to the drugs experienced remarkably durable benefits – by one assessment, the median duration of response was 13.6 months, and by another assessment, it was 36.9 months.

Although the drugs only helped patients whose tumors carried the rare V600E mutation, Wen said the results were encouraging “because people were starting to think you will never have any targeted therapies for glioblastoma.” He added that there is emerging evidence that there may be other targets in gliomas that could be blocked by designer drugs.