Cancer physicians have long disagreed about whether stem cell transplants from donors with an asymptomatic blood condition called clonal hematopoiesis (CH) put recipients at risk for subsequent health problems. Such concerns have even prompted some transplant centers to exclude these individuals as donors.

In a new study, researchers at Dana-Farber Cancer Institute show that in most cases, such transplants are safe and effective. To their surprise, they also found that if the transplanted cells carry a specific genetic mutation, recipients often had a lower risk of relapse than if the donor didn’t have CH. The findings, posted online by the Journal of Clinical Oncology, could broaden the pool of potential donors.

Clonal hematopoiesis is an age-related condition that occurs when people develop leukemia-related gene mutations in their blood even though they don’t have leukemia or other blood-related cancer. So far, CH has mainly been studied in non-transplant patients. These studies have shown that it’s common for people over age 40 to have a small proportion of blood cells with these mutations. When the proportion of blood cells with one of these mutations is high, however, patients have an increased risk of developing a blood cancer in the future, as well as non-cancerous conditions such as cardiovascular disease.

Previous studies have shown that stem cells from donors with CH can take root, or engraft, in transplant recipients, but it hasn’t been clear whether they raise recipients’ risk of leukemia or how they might affect post-transplant immune function in transplant recipients. Concerns that the health risks of CH might be transferred to recipients have made some physicians reluctant to accept older people with CH as donors. 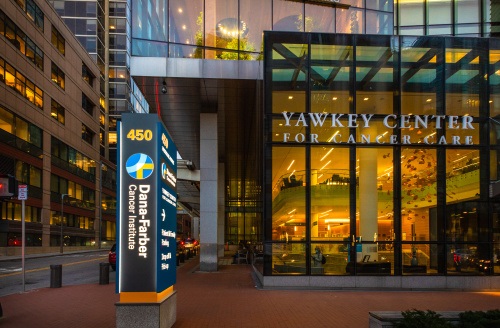 “For most patients with high-risk hematologic [blood-related] malignancies, a transplant of donor hematopoietic [blood cell-forming] stem cells is the only treatment with the potential for a cure,” said the new study’s senior author, R. Coleman Lindsley, MD, PhD, of Dana-Farber. “Patients tend to do better if the donor is under age 45, but when younger donors aren’t available, the best option may be a closely matched older sibling or relative.

“There’s strong evidence that clonal hematopoiesis can be transmitted from a donor to a recipient, but little is known about the effect this might have on recipients.  In this study, we sought to assess that impact.”

Researchers began with stem cell samples from 1,727 donors age 40 and older.  In each sample, they analyzed 46 genes for mutations that are commonly found in CH. They found that 388 of the donors – or 22.5% of the entire group – had CH. The most common mutations were in the genes DNMT3A (present in 14.6% of donors) and TET2 (in 5%).

The researchers then assessed whether the mutations from 102 of these donors could still be found in the recipients three months and one year after transplant.

“We found that 85% of CH clones from the donor transplants had engrafted,” Lindsley said. “Unexpectedly, we also found that patients survived longer overall when at least 1% of the transplanted cells had DNMT3A mutations than patients receiving non-CH transplants and that this effect was due to a lower chance of disease recurrence.”

The seemingly paradoxical discovery – that a mutation detrimental in non-transplant patients with CH can be beneficial in transplant recipients – may be explained by DNMT3A’s role within cells. In otherwise healthy people, DNMT3A mutations are associated with increased immune system activity and inflammation that promotes a higher risk of diseases like heart attacks and stroke. In stem cell transplant, by contrast, increased immune activity is precisely what’s needed to kill the recipient’s cancer cells, Lindsley explains.

In the study, none of the recipients of transplants with DNMT3A or TET2 gene mutations developed leukemia from their donor cells. Of the eight patients who did develop donor cell leukemia, seven had received cells from donors with CH whose stem cells harbored rare mutations, such as those in the TP53 gene, or who carried inherited mutations in the DDX41 gene.

“Clonal hematopoiesis is a heterogeneous condition – taking a variety of different forms in different individuals. CH with a DNMT3A mutation should not be a reason to exclude donors, because we identified no adverse effects from them and found a beneficial effect,” Lindsley said.

The finding that recipients of transplants with DNMT3A mutations often had superior survival may also lead to better treatments outside the sphere of stem cell transplantation, Lindsley continued. By combining immunotherapy agents with drugs that target DNMT3A, doctors may be able to mobilize an especially potent immune system attack on tumor cells.

Funding for the study was provided by the National Institutes of Health (grants K08CA204734, P01CA229092, K08HL136894, and R01HL156144), the Damon Runyon Cancer Research Foundation, the Alan and Lisa Dynner Fund, the James A. and Lois J. Champy Family Fund, the Jock and Bunny Adams Education and Research Fund, the Ted and Eileen Pasquarello Tissue Bank in Hematologic Malignancies, and the Connell and O’Reilly Families Cell Manipulation Core Facility.