Seventy-five years of research that has recast the understanding, treatment, and prevention of cancer took center stage at the Dana-Farber 2022 Scientific Symposium on Sept. 29.

The all-day event featured nearly 20 presentations on topics such as the evolution of basic research at the Institute, the rise of precision medicine, the experience of Dana-Farber patients, and reports from a range of primary investigators on recent advances in their labs. Speakers provided a panoramic view of an organization whose scientific contributions over more than seven decades have exceeded anything that was imaginable at the time of its founding.

At the time of its creation in 1947, the Institute was something of an anomaly, Chief Scientific Officer Emeritus Barrett Rollins, MD, PhD, said in his talk on the evolution of basic cancer research at Dana-Farber. "There was no reason to assume, a priori, that basic science was something that would be done at a cancer center," Rollins observed, but Institute founder Sidney Farber, MD, "made sure, right from the start, that it was an integral part of Dana-Farber's mission."

Rollins identified five "threads" of research that have been constants in the Institute's scientific work. They include chemistry, genetics, cell biology, immunology, and data sciences.  "Dana-Farber was founded in chemistry," he remarked. "Sidney Farber hoped to find agents that would inhibit folic acid in children with leukemia." He went on to cite the work of Fred Li, MD, whose studies led to the identification of tumor-suppressor genes; of David Livingston, MD, who showed that viruses can cause cancer by shutting down such genes; of Matthew Meyerson, MD, PhD, William Sellers, MD, and others, who identified a key molecular vulnerability in lung cancer cells; of Stuart Schlossman, MD, who helped build the Institute's immunology program, and Gordon Freeman, MD, who discovered the PD-1 protein, which, if blocked, can expose cancer cells to withering immune system attack; of Marvin Zellen, PhD, "a giant of data sciences, whose statistical techniques are used all over the world"; and other Dana-Farber scientists whose research has altered the course of cancer science and treatment.

Rollins' "whirlwind tour" of the history of basic research at the Institute was followed by talks by other research leaders. William Hahn, MD, PhD, executive vice president and chief operating officer, spoke of the Institute's adeptness at "taking advantage of technological advances" – how, for example, it seized on advances in genomic sequencing to launch Profile, a research program that scans patients' tumor tissue for cancer-related genetic abnormalities. 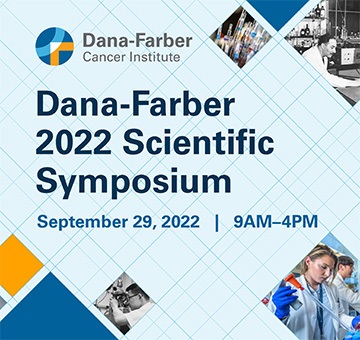 Scott Armstrong, MD, PhD, chair of Pediatric Oncology, recounted Dana-Farber's role in improving the treatment of childhood acute lymphocytic leukemia (ALL), work, he said, that "is among the 20th century's greatest accomplishments in cancer medicine." Armstrong described how others built on Farber's seminal study showing that folic acid blockers could produce remissions in children with ALL – the first ever achieved in pediatric leukemia. He provided a travelogue of an odyssey that led from work by former Dana-Farber President Emil "Tom" Frei III, MD, and Emil Freireich, MD, showing that combinations of chemotherapy drugs could extend patients' survival; to work by former Chief of Staff Stephen Sallan, MD, indicating that improvements in clinical care could improve survival; to the introduction of monoclonal antibodies, Todd Golub, MD's finding that certain genetic abnormalities in ALL cells can predict patients outcomes, and the use of genomic information to guide treatment.

Dana-Farber President and CEO Laurie H. Glimcher, MD, shifted the focus of the symposium to the future of research at the Institute. She discussed four areas identified as priorities going forward.

The first, immunotherapy, has come to the forefront because of research by Freeman and others that revealed targets for drugs that can cause tumors to drop their guard against an immune system attack. The effectiveness of such drugs in some patients with certain cancers is but the first indication of their potential, Glimcher said. "We need to double the number of patients who can be treated successfully with immunotherapy," she remarked, citing personalized therapeutic cancer vaccines developed by Catherine Wu, MD, and CAR T-cell therapies as particularly promising.

A second priority, drug development, is something few other cancer centers – lacking strong chemical biology programs – are equipped to do, Glimcher continued. Eric Fischer, PhD, and others are laying the groundwork for agents that don't merely block cancer-related proteins but cause them to be destroyed. Glimcher predicted that the next revolution in cancer care will involve another priority area – prevention, early detection, and interception of early cancer growth. "If we can detect cancer at stage I, we can cure it," she stated, noting that far too many cancers aren't diagnosed until a later stage. "We have tremendous resources in this area," she added, including the Lynch Syndrome Center, the Center for Prevention of Progression, and the Center for Cancer Genetics and Prevention.

Research into, and efforts to eliminate, disparities in cancer care and outcomes is a priority as well, Glimcher said. "Every discovery – every breakthrough – that we make only makes a difference if it is based on research that captures the experience of all the patient communities, especially those that have been historically underserved," she said. "Our charge now is to continue our quest to deepen our knowledge of specific risk factors of patients from historically underserved communities. We need to dig deeper into the social determinants of health and how socioeconomic status affects outcomes. We want to make sure that every patient, no matter their ZIP code, has equitable access to the best cancer care." This is especially true for participation in clinical trials, she added.

"These are ambitious goals," she said, "but we have to be ambitious because there is so much more that we have to do to reduce the burden of cancer."